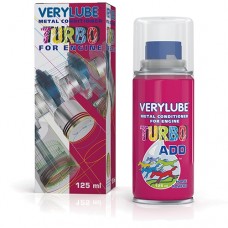 Metal conditioner TURBO is a product of modern nanotechnology and is designed for comprehensive protection and restoration of friction conventional engines and turbo engines (so the product received the prefix "turbo").

Regular use of metal conditioner TURBO

Round polyatomic molecule called C60 Fuller (in honor of the famous American architect B. Fuller, who proposed to build a dome-shaped openwork design of pentagons and hexagons). The existence of such molecules has been predicted as early as 1970., But found they were only in 1985, and already in 1996 the discovery of fullerenes was awarded the Nobel Prize in chemistry.  Since then, the miracle molecule found application in many fields of science and technology. As a side not left and Tribology (tribology - the science of friction): This beautiful and unique molecule was perfect ball! The presence of such balls in the lubricant eliminates the sliding friction. Sliding friction will always move in the rolling friction, which means that the friction coefficient decreases in 1000!). And time is reduced parasitic friction - reduces wear and tear, can not stop the aging mechanism! As the density and hardness superior to diamond fullerenes, ie C60 can withstand large loads. The oil film in which there is a metal conditioner TURBO, it becomes much stronger and now even overloads eliminated contact moving parts. Additionally, metal conditioner TURBO contains a carefully designed package of chemical compounds, which allows a maximum degree of implementation of the principle of friction and bezyznosnogo dimension to repair parts and mechanisms by compensating for wear. So, in a specially made ​​formula TURBO surface and chemically active substances (surfactants and Haw) fullerenes can hold on friction surfaces in the busiest areas. This makes it possible to smooth roughness and improve the tribological properties of friction, eliminate vibration and noise. And finally, the metal conditioner TURBO improves the properties of the engine oil by the presence of a balanced mix of antioxidant, anti-corrosion, anti-wear and extreme pressure additives. Extends the life of the oil, prevents premature aging.

Step 1: To submit a hot engine through the oil filler neck at the rate of one bottle (125 ml) at 3-5 liters of engine oil. The optimum concentration - 3 on the volume of oil. Overdose permissible to 50 (ie, to 4.5 of the volume of oil).

Stage 1: The composition has a mild detergent properties that contribute raskoksovyvaniyu rings.

Step 1: For the best performance use on a regular basis at every oil change.

Step 1: Guaranteed increase wear resistance motor 2-4 times running without a major overhaul of more than 300 000 km (with regular use since the break).

49.00€
Add to Cart
Add to Wish List
Compare this Product

28.99€
Add to Cart
Add to Wish List
Compare this Product

14.99€
Add to Cart
Add to Wish List
Compare this Product

22.99€
Add to Cart
Add to Wish List
Compare this Product

68.97€
Add to Cart
Add to Wish List
Compare this Product